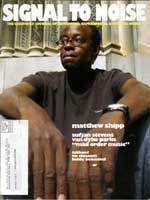 The Winter 2010 issue of Signal To Noise arrived this weekend and with it reviews of the latest releases from Taylor Ho Bynum & SpiderMonkey Strings, the Fonda/Stevens Group, The Fully Celebrated, the Darius Jones Trio and the Joe Morris Quartet.

“Bynum’s compositions consistently engage and amplify the texts [from his sister’s novel, Madeleine is Sleeping],” writes Stuart Broomer in his review of Madeleine Dreams (Firehouse 12 Records), “and the performances are at a high level. Vocalist Kyoko Kitamura ranges from pensive dramatic readings to jazz-inflected vocals and creative improvisations, performing admirably in the divergent settings. The group’s improvisational skills come to the fore on pieces by three great composers—Ornette Coleman, Duke Ellington and Sun Ra—whose works are all subtly complementary…the results are driving, focused, expressive performances that make the most of the jazz tradition.”

“After 20 years of musical partnership, pianist Michael Jefry Stevens, bassist Joe Fonda, drummer Harvey Sorgen and trumpeter Herb Robertson have developed a rich chemistry,” declares James Hale. “On Memphis, their 11th recording, the quartet surges with energy—equal parts Stevens’ proclivity for aggresive vamps, Robertson’s slippery slalom runs, and a wrecking crew of a rhythm duo. When the mood turns somber individual members find ways of keeping the tension high, whether its Fonda’s abrasive arco on ‘For My Brother’ or the free segments that alternate with Stevens’ pretty theme on ‘Whale Majesty.'”

“Alto saxophonist Jim Hobbs, bassist Timo Shanko and drummer Django Carranza hammer away at eight slices of groove-based music that is is peppy, incisive and yes, amusing,” explains Jay Collins in his review of Drunk on the Blood of the Holy Ones (AUM Fidelity). “The Fully Celebrated is a group that doesn’t take themselves too seriously, but the music is of high caliber and a hell of a lot of fun.”

Marc Medwin describes the Darius Jones Trio’s debut, Man’ish Boy (AUM Fidelity), as “a barn-burner from note one. Jones could not have chosen better musicians to enter into his world, with Cooper-Moore and drummer Rakalam Bob Moses enhancing every moan, cry and shriek emanating from his alto.”

Jay Collins calls the Joe Morris Quartet’s second release, Today On Earth (AUM Fidelity), “Morris at his most accessible. His tremendous single-note flurries come to bear immediately on the boppish ‘Backbone’ and the exuberantly swinging ‘Imaginary Solutions.’ The quartet’s keen melodic sense is eveident on ‘Ashes’ and the ruminative ‘Animal,’ especially in Hobbs’s earthy, gripping saxophone playing. Hobbs and Morris’s unison lines against the rhythm section’s restless activity are part of the record’s pleasures. Like Drunk on the Blood of the Holy Ones, Today on Earth has it all: smart compositional structures that launch tasty, unpredictable improvisations.”

We’re incredibly pleased to report that The Jazz Session‘s Jason Crane has chosen three of our clients’ releases for his Top 10 list for 2009.

The popular interviewer/podcast host, and columnist for PopDose.com, selected the Fay Victor Ensemble’s The FreeSong Suite (Greene Avenue Music) as his top pick for the year, followed by the Darius Jones Trio’s Man’ish Boy (AUM Fidelity) and The Fully Celebrated’s Drunk on the Blood of the Holy Ones (AUM Fidelity) at numbers 3 and 4, respectively.

Crane, who published his list in the format of his ballot for the Village Voice‘s Jazz Critics Poll, also chose Ms. Victor’s record as Best Vocal Album and Jones’ record as Best Debut CD.

The latest can to be kicked around the jazz blogosphere (and beyond) is what records make the cut as the best of the decade.

As much as we enjoy the opportunity to reminisce about our first seven-plus years in business, and the 135 recordings we promoted for our clients in that span, we’re not quite ready to dip a toe in that nearly bottomless pool just yet.

But, we’re more than happy to shine a light on the recordings we promoted for our clients in 2009 (in order of their release).

Hopefully at least a few of these will end up on your year’s best list or at least your list for Santa.

The new Fall 2009 issue of Jazziz features reviews of The Fully Celebrated’s Drunk on the Blood of the Holy Ones (AUM Fidelity) and the Michael Musillami Trio + 3’s From Seeds (Playscape Recordings).

“The album feels fresh and playful,” writes Michael Roberts about the former, “displaying the creative exuberance typically associated with young players in the joy-of-discovery phase. [Alto saxophonist Jim Hobbs’] approach empasizes wit, accessibility and a willingness to venture into disparate stylistic territories…the longtime bandmates can do more than genre-hop. The Fully Celebrated’s heady blend brims with a vitality that hasn’t ebbed with the passage of time.”

“Guitarist Michael Musillami performs one of the best high-wire acts in jazz,” declares Ed Hazell, “walking the line between ‘inside’ and ‘outside’ without ever losing his poise. There’s no predicting the direction of any given tune. Arrangements make consistently imaginative and effective use of the horns. Seamlessly assembled and performed, From Seeds features not such a trio plus three as a fully realized sextet.”

The first is alto saxophonist/composer Darius Jones‘ debut recording as a leader and features frequent collaborators Cooper-Moore (piano and diddley-bo) and Rakalam Bob Moses (drums). The other is the second release from guitarist/composer Joe Morris‘ quartet featuring Jim Hobbs (alto saxophone), Timo Shanko (bass) and Luther Gray (drums), and the third AUM Fidelity release this year to feature Morris in a prominent role.

“Man’ish Boy is a sonic tone poem about me and my life growing up in the South,” Jones explains. “Music was a part of my life from the very beginning and my musical development was very organic. I was always encouraged to be an individual and to find my own voice. The concept of singing never left my musical ideas and there is nothing like the organic and soulful nature of the human voice. I wanted every melody to have a vocal quality to it. When I thought about other musicians that had a deep, organic soulful concept as well, I immediately thought of Bob Moses and Cooper-Moore. They have both developed a singular concept of sound and creativity on their instruments, and the amount of knowledge and experience they have is priceless.”

Jones came to New York from his native Virginia in 2005 and has since displayed his distinctive sound and composing style in a wide variety of genres. In addition to his working trio with bassist Adam Lane and drummer Jason Nazary, which appears here on a special bonus track, he actively performs with Lewis Barnes’ Hampton Roads, the Cooper-Moore Trio, William Hooker’s Bliss (East), Little Women, Mike Pride’s From Bacteria to Boys and Mara Rosenbloom’s Arrival Quartet. He is also a teacher and producer of records by Korean jazz vocalist Sunny Kim and country-folk artist Mary Bragg. Learn more at http://www.myspace.com/blackdajones

Morris follows-up July 2009’s Wildlife (AUM056), his first recording for AUM Fidelity as a bassist, with a return to guitar on Today On Earth featuring the four year-old Joe Morris Quartet. The group traces its history back to 2002 when Morris, Shanko and Gray recorded their trio debut, Age of Everything, for Morris’ own Riti Records. Three became four when Hobbs, Shanko’s longtime collaborator in The Fully Celebrated, was added to the mix for 2005’s Beautiful Existence (Clean Feed). Today on Earth features seven new compositions written specifically for this band. “I always write to the players I’m working with,” Morris explains. “I choose players who can do what I think I want to do, and who push me to play differently. These guys do both.”

A self-taught musician, Morris has forged his own distinctive path as a guitarist for more than three decades. Critics have called him “the preeminent free music guitarist of his generation” (DownBeat), “one of the most profound improvisers at work in the U.S.” (Will Montgomery, The Wire) and “the most exciting guitarist working in the jazz tradition” (Ed Hazell, Boston Phoenix). Since 2002, he has also impressed critics and musicians alike in numerous projects as an acoustic bassist, ushering in the most prolific era of his career. Since the beginning of 2008, he has appeared on nearly 20 recordings, including collaborations with such notable artists as Anthony Braxton, Hamid Drake, William Parker, Barre Phillips, Matthew Shipp and David S. Ware. Learn more at http://www.aumfidelity.com/morris.html

It’s been an active week in the blogosphere, so our old friends the Friday Linx are back to share some of their highlights.

AccuJazz.com Jazz Brand Director Lucas Gillian shines the spotlight on some of his favorite new releases, including music from Darcy James Argue, The Fully Celebrated, Michael Musillami and Positive Catastrophe among many others.

The Ottawa Citizen‘s Peter Hum tells us Vijay Iyer compsitions are being used as cues on ESPN and explores the many ways jazz musicians can use the Web to snare new fans.

Hypebot reports that digital music will account for 83% of recorded music sales by 2013.

The Fully Celebrated‘s new CD, Drunk on the Blood of the Holy Ones (AUM Fidelity), as well as its previous release, 2005’s Lapis Exilis (Skycap Records) featuring Taylor Ho Bynum, are among the picks of the week at Avant Music News.

Improvised Communications
Create a free website or blog at WordPress.com.