Fresh off her week-long tour of Europe, guitarist/composer Mary Halvorson heads into the studio today at New Haven’s Firehouse 12 to record the follow-up to her highly acclaimed 2008 debut, Dragon’s Head (Firehouse 12 Records).

The session will feature her newest group, the Mary Halvorson Quintet, which adds trumpeter Jonathan Finlayson and alto saxophonist Jon Irabagon to her longstanding trio with bassist John Hébert and drummer Ches Smith.

The as-yet-untitled recording is expected to be released in the Fall.

This will be the band’s final performance before going into the studio later in the month to record all new material for its forthcoming 2010 release on Firehouse 12 Records.

Check out this preview in the New Haven Advocate and WNYC’s review (with lots and lots of pictures) of the group’s performance earlier in the week at Barbès in Brooklyn.

“Mary Halvorson is the freshest, busiest, most critically acclaimed guitar-slinger out of downtown Manhattan/Brooklyn right now,” declared eminent jazz critic/author Howard Mandel on his blog, Jazz Beyond Jazz. Critics have also called her “a new voice on the instrument” (Philip McNally, Cadence), “probably the most original jazz guitarist to emerge this decade” (Peter Margasak, Chicago Reader) and “the most impressive guitarist of her generation” (Troy Collins, AllAboutJazz.com). “She plays guitar in a way that fractures conventions,” added Steve Dollar in the New York Sun, “restlessly inventing her own paradigms.”

An active member of the diverse New York music scene since 2002, Ms. Halvorson has toured the globe with groups spanning a wide variety of genres. In addition to her trio and quintet, she co-leads a genre-defiant duo with violist Jessica Pavone, the avant-rock trio People and the improvising collective The Thirteenth Assembly. She is also a member of several of iconic saxophonist/composer Anthony Braxton’s ensembles, as well as groups led by Tim Berne, Taylor Ho Bynum, Trevor Dunn, Myra Melford, Tom Rainey and Marc Ribot among others. Her discography features nearly 25 releases on more than 15 labels, including her first effort as a bandleader, Dragon’s Head, which the New York Times‘ Nate Chinen called “one of the standout jazz albums of 2008.” Learn more at http://maryhalvorson.com

Tonight, guitarist/composer Mary Halvorson and her newest group, the Mary Halvorson Quintet, will open Ars Nova Workshop‘s 10th anniversary season with a performance at the International House in Philadelphia.

This will be one of only three performances this fall, with varying personnel due to scheduling conflicts, before the group goes into the studio to record the follow-up to Ms. Halvorson’s widely acclaimed debut, Dragon’s Head (Firehouse 12 Records).

She will also be performing this month with Matthew Welch’s Blarvuster on September 17th and 18th at The Kitchen in New York and with Ches Smith and These Arches on September 23rd at Barbès in Brooklyn. “Halvorson specializes in strangely tuneful provocations, and that was as true on Sunday as it is throughout Dragon’s Head, her excellent debut, released last year on Firehouse 12,” Chinen writes.

He adds, “I caught the first public appearance of this [new] group at Roulette in February, and can happily attest that it has come a long way since. The music felt appealingly roomy, with enough looseness to allow for solo engagement.”

The Mary Halvorson Trio‘s December 22nd performance/interview on WNYC’s Soundcheck is now being featured on the NPR Music Web site.

The 16-minute segment includes Ms. Halvorson speaking about a number of career and music-related topics, as well as live performances of two tracks from the trio’s acclaimed 2008 debut, Dragon’s Head (Firehouse 12 Records).

Ms. Halvorson and her trio, along with special guests Jonathan Finlayson (trumpet) and Jon Irabagon (saxophone), will perform at Roulette in New York on Friday night. 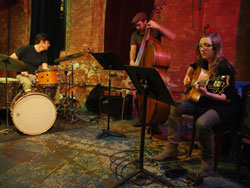 On Friday, February 13th, Brooklyn-based guitarist/composer Mary Halvorson and her trio will perform at Roulette in New York.  The group, which features bassist John Hebert and drummer Ches Smith, will be joined special guests Jonathan Finlayson (trumpet) and Jon Irabagon (saxophone) for the premiere of new music, as well as selections from its acclaimed 2008 debut, Dragon’s Head (Firehouse 12 Records).