The latest can to be kicked around the jazz blogosphere (and beyond) is what records make the cut as the best of the decade.

As much as we enjoy the opportunity to reminisce about our first seven-plus years in business, and the 135 recordings we promoted for our clients in that span, we’re not quite ready to dip a toe in that nearly bottomless pool just yet.

But, we’re more than happy to shine a light on the recordings we promoted for our clients in 2009 (in order of their release).

Hopefully at least a few of these will end up on your year’s best list or at least your list for Santa.

In his review of Sided Silver Solid, the second release from keyboardist/composer Carl Maguire’s longstanding group Floriculture, he writes, “the new, expanded version of the group provides him with a vast range of colours at his disposal, and Maguire dispatches the various combinations effectively.”

He adds, “The front line of violist Stephanie Griffin, with her background in contemporary classical music, and Oscar Noriega’s alto sax and clarinets blend in novel ways with Maguire’s piano, bolstered by the rock solid rhythm section of bassist John Hébert and drummer Dan Weiss. The tunes are marked by angular yet captivating melodies.”

He succinctly sums up Wildlife by writing, “Luther Gray is great. Morris as unpredictable as ever —and I always welcome his lyricism on bass. Cancura is a guy to watch. Enjoy!”

“Carl Maguire creates a musical experience that is really out of the ordinary,” Gijssels declares, “mixing lots of extended techniques, with cinematic imagery, eery sounds and beautiful soloing. It is different, and no matter how much you listen to it, you will discover new things. A great record.”

Photo by Chad Batka for The New York Times 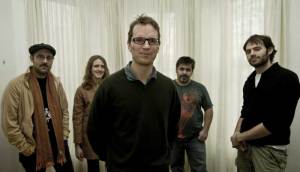 Reservations are recommended for this event, which will feature the band collaborating with visual artist, Joshua Ponte.

Firehouse 12 Records is proud to announce the June 16th release of its first two recordings of 2009.

Carl Maguire’s Floriculture will mark the release of Sided Silver Solid a week from tonight on June 23rd at Monkey Town in Brooklyn.

The CD release party for Byzantine Monkey will be a two-night affair at New York’s Cornelia Street Cafe on September 25th and 26th.

Critics called Floriculture “as exciting a debut release as any in the last few years” (Penguin Guide to Jazz Recordings), noting “Maguire’s amazing compositions” (Dr. Ana Isabel Ordonez, JazzReview.com), “a kind of rigorous enthusiasm in play that was seriously exciting” (Brian Olewnick, Bagatellen) and “an overwhelming percentage of the attributes that make for stimulating listening” (Nic Jones, AllAboutJazz.com).  The New Yorker adds, “Floriculture pulls off its new-jazz improvisation and lyrical abstraction with panache.”

Based in New York since 1995, Maguire, a native of Madison, Wisconsin, has studied piano with Marilyn Crispell, Fred Hersch and Ursula Oppens, improvisation with Roscoe Mitchell and composition with Mark Dresser.  Known for his abilities on piano, Rhodes and accordion, he has led Floriculture, his main focus as a bandleader, for the past eight years, in addition to performing and recording with a wide variety of other groups, such as the Laurel Anders Orchestra, Barbez, Butch Morris’ New York Skyscraper, Brett Sroka’s Ergo, the Tyshawn Sorey Quartet and The Wau Wau Sisters.  Learn more at http://www.carlmaguire.com

Improvised Communications
Create a free website or blog at WordPress.com.