Boston Phoenix: The Year In Jazz

The Boston Phoenix‘s resident jazz aficionado Jon Garelick reflects on his 10 favorite moments of the year in this week’s issue.

“Call what Garrison Fewell does composition or simply strategies for improvisation,” Garelick writes. “Whatever, the guitarist formerly known as one of Boston’s most eloquent inside players has become one of its leading experimenters. On this year’s Variable Density Sound Orchestra (Creative Nation Music), Fewell gathered some superb improvisers—among them frequent guitar-duo partner (and CNM honcho) Eric Hofbauer, New York trumpeter Roy Campbell, and Italian bass-clarinettist Achille Succi—and they, following his spare instructions and often graphic scores, created a suite of ‘variable density’ and unforced lyricism, all with compositional integrity.”

“Alto-saxophonist Jones, 31, now lives in Brooklyn (natch),” Garelick continues, “but he hails from rural Virginia, and he likes churchy old blues, boogie-woogie, and the kind of folkish tunes that Albert Ayler used to write. On Man’ish Boy (AUM Fidelity), his music sounds older than old—ancient, in fact—but also completely up to the minute. Working with Boston drummer Bob Moses and New Yorker Cooper-Moore (who plays piano and his homemade diddley bow), Jones delivers forceful melodies with a just-discovered freshness. The trio’s show at Outpost 186 in October was a standout.”

“To call Darius Jones’s music avant-garde seems almost beside the point,” Garelick writes. “In its way, it’s older than old—it’s ancient. Jones likes churchy old blues, boogie-woogie, and the kind of folkish tunes that Albert Ayler used to write. He also shares Ayler’s moaning, wide-vibrato tone, if not the sainted saxophonist’s taste for single-minded, iron-jawed shrieking. But Jones has his own dignified way of testifying—big, long tones that patiently build to skirling figures and ululating shouts.”

Those savvy Web surfers the Friday Linx are back to bring you some of their favorite stories of the last week or so.

Two new reviews of the The Fully Celebrated‘s forthcoming AUM Fidelity debut, Drunk on the Blood of the Holy Ones, to report so far this week.

“[Jim] Hobbs, the leader and primary songwriter, is one of his generation’s most gifted altoists,” writes AllAboutJazz.com’s Troy Collins, “his ability to effortlessly glide between pitches and microtones enables a boundless capacity for tonal expression. Filled with memorable melodies, stirring interplay and a wealth of sonic variety, Drunk On The Blood Of The Holy Ones is a welcome return from one of the most resourceful saxophone trios working today.”

In his review in this week’s Boston Phoenix, Jon Garelick added, “After two albums with cornetist Taylor Ho Bynum, and now dropping ‘Orchestra’ from their name, this venerable Boston avant-garde street band are again a trio—and they’re still a virtuoso ensemble. There’s no one with a more individual sound and conception than Hobbs—strangled and crying one minute, soft and bluesy the next, or just plain Johnny Hodges purdy.”

The disc officially hits the streets May 26th, to be followed by CD release shows at Barbès in Brooklyn on May 28th and Ryles Jazz Club in Boston on May 29th. 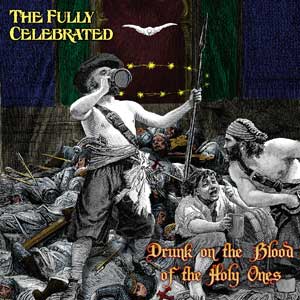 On May 26th, AUM Fidelity will release The Fully Celebrated‘s seventh recording, and label debut, Drunk on the Blood of the Holy Ones (AUM054).

Led by saxophonist Jim Hobbs, and formerly known as The Fully Celebrated Orchestra, the group has been a fixture on Boston’s jazz scene for more than two decades.  For its first release in four years, the founding line-up of Hobbs, bassist Timo Shanko and drummer Django Carranza returned to the studio to document eight new quintessentially eclectic compositions.

CD release concerts are scheduled for May 28th at Barbès in Brooklyn, New York and May 29th at Ryles Jazz Club in Cambridge, Massachusetts.

“Jim Hobbs and his Fully Celebrated Orchestra combine vast musical prowess and playful, irreverent intelligence,” wrote AllAboutJazz.com’s Paul Olson in his review of the group’s most recent release, 2005’s Lapis Exilis (Skycap Records). “No one today is playing the alto better than Hobbs—the vast range of tones he summons from the small horn is altogether remarkable…Carranza and Shanko are a devastating rhythm section…a powerhouse group.  Jim Hobbs and the Fully Celebrated Orchestra play virtuoso jazz music with a marked eclecticism.”

“The FCO first gained notoriety in the rock clubs—or, at least, it was the rock crowd that first created the buzz,” recalls longtime Boston Phoenix arts writer Jon Garelick.  “Maybe that’s because the band are proponents of old-fashioned avant-garde inclusiveness: funk, Latin, blues, Balkan, and any number of ‘world’ melodies, scales, and rhythms show up in the FCO book, with plenty of free-jazz-collective chatter.  Other reference points are Ornette Coleman, Don Cherry and Thomas Chapin, but the band’s personality is its own.”

Founded in 1987, The Fully Celebrated Orchestra began as the Jim Hobbs Trio, a group that mostly performed on the streets of Boston.  It recorded its debut, Babadita, under that original name for Silkheart Records in 1993, but by the time the label released its follow-up later that same year, the ironically over-sized new name was in place.

Four more records, most capturing the band in the live setting, would follow over the next dozen years, including two as a quartet with cornetist Taylor Ho Bynum in 2002 and 2005.  Following a period of relative inactivity following Bynum’s departure to New York, Hobbs reconvened the band’s original line-up in October 2008 to record a new collection of original material, which they recorded live and mixed utilizing the latest Dub technology.

The Michael Musillami Trio + 3’s From Seeds Coming May 19th

Playscape Recordings is proud to announce the May 19th street date of the first release on its 10th anniversary schedule, the Michael Musillami Trio + 3’s From Seeds (PSR#020109).

The full group will tour the Northeast U.S. in support of the record in May and the core trio will tour Western Europe in late March.

“Composing and arranging all new music for a cohesive group that combines vibes, trumpet, and alto with a guitar trio meant taking things to a whole new level,” explains Musillami in the From Seeds liner notes.

“Joe, George and I have come to trust each other completely on the stand.  The drama and constant shifts in environments can be both frightening and beautiful, and I didn’t want to lose any of the close interaction we’ve developed over the past seven years.  I needed three players with the sound, experience and confidence to not only play this music, but also put their stamp on it without taking away from what the trio does best.  Marty, Matt and Ralph were perfect choices.”

“Guitarist Musillami is really on a roll lately, documenting a number of high quality sessions on his Playscape label,” declared Cadence reviewer Jason Bivins.  Critics called his most recent, The Treatment, “scintillating and provocative” (Bill Milkowski, Absolute Sound), “an intensely rewarding and conceptually promising avenue for the future of jazz” (Troy Collins, AllAboutJazz.com) and “as convincing a statement of what’s still possible with the instrumentation as anything I’ve heard in years” (Brian Morton, PointofDeparture.org).

It was also included in best-of-the-year lists in AllAboutJazz.com, Cadence, Coda, the Hartford Courant, Jazz Review and the Village Voice.

“His compositions develop in leisurely style from quiet simplicity to intricate complexity,” explained Jack Massarik in Jazzwise, “and the ensemble playing is civilized, sophisticated and clean.”  The Boston Phoenix‘s Jon Garelick adds,  “Musillami sounds familiar—this is swinging jazz guitar, after all—but not quite like anyone else.”

In a career that spans more than 25 years, Musillami has worked extensively as a performer, bandleader/composer and educator.  In addition to his flagship trio with Fonda and Schuller, which has performed in the U.S., Canada and Europe and released three CDs since 2002, he has earned critical notice as the leader of groups ranging from duo to octet featuring such prominent collaborators as Cameron Brown, Thomas Chapin, Drew Gress, Mario Pavone, Michael Sarin and Matt Wilson.

He is also the longtime Director of Jazz Studies at The Hotchkiss School and founder/director of the esteemed Playscape Recordings label, which has released more than 40 distinctive recordings over the past decade.  Learn more at http://www.michaelmusillami.com