Company of Heaven, the booking agency for many of creative improvised music’s biggest names, will hold its second annual jazz festival at New York’s Cornelia Street Café this weekend as part of the festivities surrounding the 2010 Association of Performing Arts Presenters (APAP) Conference.

The first concert will be Saturday at The Stone followed by a Sunday night gig at Cornelia Street Cafe.

This new configuration of frequent Pavone collaborators will perform new material, as well as new arrangements of older music from Pavone’s vast catalog.

The band will perform on Saturday, August 22nd at The Stone and on Sunday, August 23rd at Cornelia Street Cafe (PLEASE NOTE: this is a rescheduling of the previously announced/postponed date at The Local 269).

Despite the fact that we’re already in the first week of August (the eighth month on the calendar for those of you scoring at home), the best-of lists for the first half of the year continue to trickle in.

This has been a pretty popular new trend this year, especially with bloggers, and late or no we’re not complaining, especially when our clients are still appearing on them.

And none of our clients has been found quite so list-worthy as Darcy James Argue, whose May debut, Infernal Machines (New Amsterdam), continues to capture the hearts and minds of critics everywhere.

As always, we thank all our media contacts for their ongoing support of independent creative improvised music.

UPDATE: The August 23rd date has been rescheduled for Cornelia Street Cafe.

Unfortunately, we’ve just been informed that while the first date, one month from tonight at The Stone, will happen as planned, the August 23rd concert at The Local 269 has been indefinitely postponed.

The venue has decided to move the Freestyle Music Series to a different night of the week starting immediately.

Please adjust your calendar as appropriate.

“On his day,” declared veteran jazz reviewer Brian Morton in Point of Departure, “Mario Pavone is one of the very best—and when on his game, by far the best—small-group composer/leaders working on the East Coast.” Critics have called him “a smart composer” (Nate Chinen, New York Times) and “a protean bassist” (Paul Blair, Hot House) who “never fails to implant an effective hook” (Bill Shoemaker, DownBeat) and “continues to move the tradition forward with every record” (John Kelman, AllAboutJazz.com). His music has been described as “exciting and stimulating” (Jay Collins, Cadence), “sensitive and probing” (Owen McNally, Hartford Courant) and “full of smart angular swagger” (Michael Rosenstein, Signal to Noise).

Pavone has spent the past four decades defining the cutting edge of jazz, both as a sideman to legendary innovators and the leader of groups featuring some of today’s most respected young improvisers. As busy as ever at nearly 70 years old, he released two notable records in 2008: Trio Arc, featuring Paul Bley and Matt Wilson, and Ancestors, featuring his Double Tenor Quintet with Malaby and Jimmy Greene. So far this year he’s also performed with groups such as the Connecticut Improvising Composers Project and his intergenerational trio with Sorey and saxophonist Pete Robbins, which will perform at The Stone on August 21st. He was also awarded a 2009 New Jazz Works Grant from Chamber Music America.

After an extended layover on the floor of the Gouverneur, NY post office, the Apr/May/Jun 2009 issue of Cadence arrived to subscribers this past week, and with it a number of enthusiastic reviews of our clients’ recent recordings.

Here are a few highlights:

In his review of the Mary Halvorson Trio’s debut, Dragon’s Head (Firehouse 12 Records), Philip McNally writes, “In her notes to this recording she mentions, surprisingly, that this is the first time she has written for the standard guitar trio. I find it hard to believe, as Dragon’s Head is so accomplished a recording. This is post-Bill Frisell guitar, a new voice on the instrument, and for that alone you should hear it.”

“It’s an adventurous, unexpected tribute,” declares David Dupont in his review of the Yoon Sun Choi/Jacob Sacks Duo’s Imagination: The Music of Joe Raposo (Yeah Yeah Records). “Choi impresses equally, whether clowning around and summoning inner animations or singing heartfelt lyrics. All this sets the lyrics in striking relief, wrenching them from their familiar context.”

“Petit Oiseau is an album that simultaneously celebrates jazz tradition and looks beyond it,” proclaims Michael Coyle in his review of the William Parker Quartet’s latest release. “This quartet has been playing together since the turn of the milennium and has that kind of rapport where they complete on another’s thoughts and finish one another’s sentences. Each member contributes sensitively and powerfully to the ensemble sound.”

Saxophonist Pete Robbins will talk about this Friday’s concert at Firehouse 12 with bassist Mario Pavone and drummer Tyshawn Sorey tonight at 6:00 p.m. on WHUS 91.7 FM in Storrs, Connecticut. 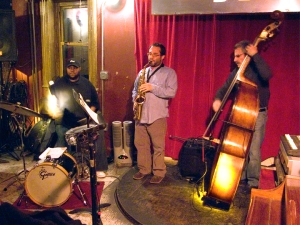 On Friday, April 3rd, Firehouse 12 will present the collective trio of saxophonist Pete Robbins, bassist  Mario Pavone and drummer Tyshawn Sorey.  Brought together by Robbins, a former labelmate of Pavone’s and frequent collaborator of Sorey’s in the band sILENT Z, the year-old intergenerational group, and its completely improvised music, is a rare departure from its well-known members’ other current projects.  This two-set performance is a warm-up for the band’s debut recording session the following day.

Critics credit Robbins with “coolness as well as confidence” (Nate Chinen, New York Times), “vision in his writing and improvising” (Jason Bivins, Cadence) and “a keen imagination and a rousing command of his horn” (David Adler, AllAboutJazz-New York).  Based in Brooklyn since 2002, following studies at both New England Conservatory and Tufts University in Boston, he leads the groups Centric and sILENT Z.  His most recent release is 2008’s Do The Hate Laugh Shimmy (Fresh Sound New Talent).

Pavone, an active jazz performer since the late 1960’s, has enjoyed a highly acclaimed career as a bandleader following long-term collaborations with legendary figures such as Thomas Chapin, Anthony Braxton and Bill Dixon.  As busy as ever at nearly 70 years old, he released two notable records on the Playscape Recordings label in 2008: Trio Arc, featuring Paul Bley and Matt Wilson, and Ancestors, featuring his all-star Double Tenor Quintet with saxophonists Tony Malaby and Jimmy Greene.

Thanks to his enigmatic work as a leader, and membership in such high profile ensembles as Steve Coleman & Five Elements, Dave Douglas’ NOMAD and Fieldwork, Sorey is widely regarded as one of the busiest and most versatile young musicians in New York today.  His innovative 2007 debut, That/Not (Firehouse 12 Records), was named to best-of-the-year lists in a variety of publications, including AllAboutJazz.com, the Hartford Courant, Paste, The New Republic, Time Out New York and the Village Voice.

In this week’s edition of his column, Riffs, the Hartford Courant‘s Owen McNally previews Firehouse 12’s 2009 Spring Jazz Series, which he calls “an ambitious program of 13 consecutive Friday night shows featuring some of the best musicians in improvised music.”