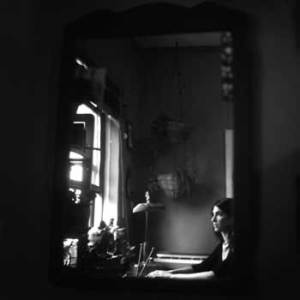 On October 27th, Tzadik will release violist/composer Jessica Pavone‘s Songs of Synastry and Solitude (TZ 7719) as part of the Oracles series, which celebrates “the diversity and creativity of women in experimental music making.” Inspired by the simple beauty of American folk songs, and singer/songwriter Leonard Cohen‘s Songs of Love and Hate (Columbia), this recording features 11 of Ms. Pavone’s original compositions for string quartet (violin, viola, cello and double bass) being performed by members of the Toomai String Quintet. The group will celebrate the release of the record on Tuesday, November 10th with a live performance at Roulette in New York.

The music on Songs of Synastry and Solitude grew out of the composing process for her 2007 release, Quotidian (Peacock Recordings), which documents a four-part suite that examines the temporal landmarks within each day. “I was most satisfied with the results of ‘Post Meridiem’, the afternoon piece,” Ms. Pavone remembers, “which explored informal music for one’s self in the middle of the day, in contrast to formal evening concerts. I wanted to continue writing string music based on the ideas in that piece, but for a quartet with double bass, which gives the music more flexibility and allows me to more easily draw from my folk music influence—the idea being I am writing ‘songs’ for a ‘classical’ ensemble.”

“I don’t feel like my music has something grandiose to portray,” she continues. “I just want it to sound real. I’m a songwriter that just happens to write instrumental songs—I hear music for small and intimate ensembles—and that was my approach to these string quartets. There is a lot of arpeggiation of chords throughout the ensemble emulating a finger picked guitar as well as a chorus/verse structure and an emphasis on simplicity. As I was composing these songs, I would check out older European composers’ string quartet scores and recordings, and every time said to myself, ‘I would never write music like this.’ Then there’d be times I’d hear a song by the Soul Stirrers or Leonard Cohen and think, ‘Ah, I would write music like this. I am going to borrow forms from this.'”

The influence of Cohen, and his dichotomous 1970 recording, are felt throughout this project, both in name and the underlying intent of the composer. “There’s a deep, unexplainable feeling I get from listening to his music,” says Ms. Pavone. “I feel like he encourages me to live outside this world and to explore what I call ‘the ghosts of all things lost’, reminders of past moments in my life that are still oddly familiar, but no longer part of my present existence. I want my music to have a heaviness—a weight that people feel and not just hear—as I try to recreate the feeling of his music, as well as my experience feeling his music.”

“Jessica Pavone is one of the busiest young performers on the city’s creative music scene,” declared Steve Dollar in a 2008 feature in the New York Sun, “lending her strings and a direct, personal style of playing them to all kinds of settings.” Jazz Review‘s Philip Clark writes, “We learn things from her music that we didn’t already know. [Her] harmonic openness turns the microscope on herself and she responds with lines of honest clarity, an oblique perspective on the familiar.” AllMusic.com’s Charlie Wilmouth adds, “Her work possesses an uncommon amount of elegance…each piece is perfectly formed, expiring just as its tiny collection of melodic materials cycles through to its logical conclusion.”

Active in New York for the past decade, Ms. Pavone is best known for her work with the iconic Anthony Braxton, and a cadre of his former students that includes guitarist Mary Halvorson and cornetist Taylor Ho Bynum. In addition to leading her own bands, such as The Pavones, she has also performed in improvising ensembles led by Jeremiah Cymerman, Laurence “Butch” Morris, Matana Roberts and Eliot Sharp, as well as such collective groups as the Mary Halvorson/Jessica Pavone Duo and The Thirteenth Assembly.

As a composer, she has earned grants and commissions from the Aaron Copland Recording Fund, the American Music Center, The Kitchen, MATA and the group, Till By Turning, which recently presented the European premiere of “Quotidian” at Faust’s Klangbad Festival 2009 in Germany. Her discography features more than 30 recordings, including recent releases from the Anthony Braxton 12+1tet, Taylor Ho Bynum & SpiderMonkey Strings and William Parker.

This entry was posted on Wednesday, August 12th, 2009 at 8:14 am and is filed under General, Jessica Pavone, Mary Halvorson, Taylor Ho Bynum. You can follow any responses to this entry through the RSS 2.0 feed. You can leave a response, or trackback from your own site.