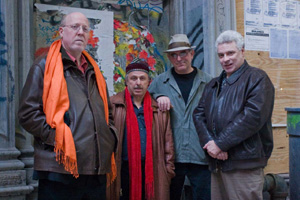 Playscape Recordings will officially welcome The Fonda/Stevens Group to its roster with the September 29th release of Memphis (PSR#033108), the eminent ensemble’s 11th recording. Only the fourth studio release in the band’s two-decade existence, Memphis was recorded at the end of a week-long March 2008 U.S. tour. The Fonda/Stevens Group is co-led by bassist/composer Joe Fonda and pianist/composer Michael Jefry Stevens and features trumpeter Herb Robertson and drummer Harvey Sorgen.

Memphis takes its name from Stevens’ composition, “Memphis Ramble,” one of ten tracks documented here for the first time. The subject matter of the piece, which features a spoken word section developed spontaneously during its first performance, deals with his move from Brooklyn to Memphis to be with his wife, who teaches poetry at Rhodes College. Coincidentally, it was the poetry of the city’s name that appealed to Fonda. “When Mike suggested we call the record Memphis,” he recalls, “I just liked the sound of the word —the poetry of it. And, Memphis is a musical melting pot, just like The Fonda/Stevens Group.”

Known as “one of the great and often under-appreciated jazz groups of the modern era” (Steven Loewy, All Music Guide), critics have credited the band with playing “with equal precision and passion” (Peter Margasak, JazzTimes) and “a combination of recognizable creativity and courageous new experimentation” (Christian Carey, Signal to Noise). “The quartet of Fonda, Stevens, Sorgen and Robertson continues to mine territory that defies categorization,” adds AllAboutJazz.com Managing Editor John Kelman. “Everyone demonstrates a fine ability to skirt the edges of convention, while at the same time stretching its boundaries.”

Active collaborators since 1984, when they first worked together as sidemen with saxophonist Mark Whitecage, Fonda and Stevens founded their own band after the 1990 demise of another all-star ensemble, The Mosaic Sextet. The Fonda/Stevens Group began as a quintet, and toured with some transitional personnel following Whitecage’s departure in 1999, but has operated primarily as a quartet with its four remaining original members for the past decade. Although based in America, the band found early success touring abroad and recording for European labels, and has built its longstanding reputation on the world stage. Learn more at http://www.joefonda.digitalspace.net and http://www.michaeljefrystevens.com

Paste‘s Andy Whitman lists the 10 best albums he’s heard so far in 2009, plus a long list of honorable mentions, in his June 29th post on the magazine’s blog.

He adds, “This is unlike any jazz I’ve heard before.”

Bynum is also teaching at the Vancouver Creative Music Institute this week and will perform in a quartet with Nicole Mitchell, Joëlle Léandre, and Paul Plimley on July 2nd and in the faculty-student showcase concert on July 3rd.

“Halvorson specializes in strangely tuneful provocations, and that was as true on Sunday as it is throughout Dragon’s Head, her excellent debut, released last year on Firehouse 12,” Chinen writes.

He adds, “I caught the first public appearance of this [new] group at Roulette in February, and can happily attest that it has come a long way since. The music felt appealingly roomy, with enough looseness to allow for solo engagement.” He adds, “The combined layering of sounds, vibrant color palate, and marvelous inventive writing makes for some startling and satisfying original music played by some very impressive musicians.”

“Guitarist Mary Halvorson, violist Jessica Pavone, cornetist Taylor Ho Bynum and drummer Tomas Fujiwara have longstanding duo and trio permutations and to end their concerts, they convene as a quartet and have forged a distinct identity from the subgroups within,” he explains.

“With committed performances drawn from intertwined histories and diverse stylistic influences, The Thirteenth Assembly exemplifies how a practical strategy can reveal a novel creative opportunity.”

Mary Halvorson Trio And Quintet At Joe’s Pub This Sunday

Guitarist/composer Mary Halvorson will perform with her newest project, an expanded version of her trio featuring trumpeter Jonathan Finlayson and saxophonist Jon Irabagon, at Joe’s Pub in New York this Sunday, June 28th at 7:00 p.m.

Check out these listings in Time Out New York and The New York Times.

If you can’t wait that long, or you just can’t get enough Mary Halvorson, you can also catch her and Finlayson performing with Tomas Fujiwara & The Hook Up at Brooklyn’s Jalopy Theater on Saturday night at 9:00.